Now that I’m back in my normal life with a house, kids and stuff I’ll had some time to think about what things that performed good and didn’t on our latest five day trip to Jotunheimen, Norway. 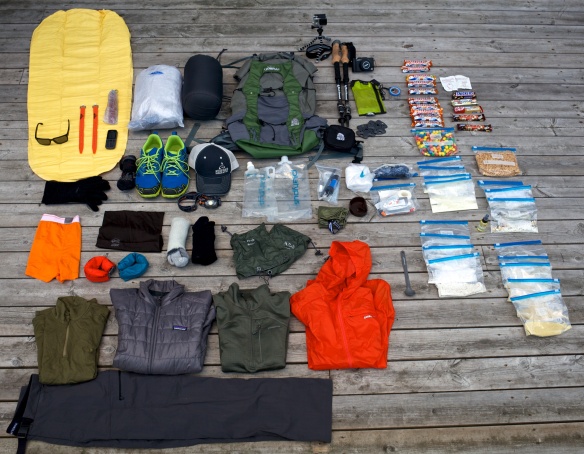 My rain jacket is missing in the picture and some of the stuff came with me to the car but then got left behind (on purpose) before we left for the trails.

I’ll just make a list here and put some comments after each item. Some of them will get more attention that others. If you looked at my spreadsheet in one of my earlier posts you’ll find all the items there with weight and everything.

INOV-8 Trailroc 245 – performed very well, were pretty new prior to the trip. I only had some pre-wear and tear on the toe protection so I glued that before I left. It did come loose but wasn’t a problem. The Trailroc’s are basically a jack of all trades kind of shoe (master of none). The general grip is good and I had only a few times where I didn’t feel fully secure walking down steep and wet rocks. Compared to my Hanwag Tatra GTX boots they perform equally good in my opinion. Now after the trip I have some heavy wear on the front “teeth”. Have walked approximately 180km in them.

Here’s a comparison from when they were new and now. (Click for larger images – goes for the whole post)

Smartwool socks (ankle high) – Nothing much to say other that they were comfortable. Didn’t wear a liner sock and had no real problem with blisters. They look quite worn now though so I guess their lifespan is about 150km. I don’t really tighten my shoes that much so they slide a little inside the shoe. I like to just have the opportunity to pull one shoe off without loosening any laces, works like a charm.

Arc’Teryx Palisade – Great pants! Light and fast drying. Easy to role up and wear as shorts.

Icebreaker Anatomica Boxers – Worked great, the only pair I wore for five days. One thing that I can’t get my head around and this applies to almost every manufacturer of underwear… Why the heck do they have to put a seam and a logo at the very back? That  will only cause chafing. Pure evil if you ask me 🙂

Icebreaker Bodyfit 200 – Good all-around shirt. Great with a zipper for easy ventilation and the arms roles nicely up to your elbows and doesn’t get too wide in the cuffs afterwards.

Buff – One of my favorite items, have been using these for years as bandana, hat, sweatband etc.

Patagonia Nano Puff Jacket – Have had this for many years now and it still performs as it should. Keeps you warm even when wet.

Patagonia Torrentshell Jacket – Nothing much to say, does what it’s supposed to. Did however get discolored on the inside after a ride in the washer. Had a white inside but it’s now yellowish. Performance is not compromised.

Should be all white inside just like the seams.

Patagonia Houdini Jacket – Awesome windjacket! Used this a lot and I’m more than happy with it.

Sealskinz Thin Mid Sock – Perfect for walking around camp in wet shoes or just standalone if you keep an watchful eye out for sharp items that could damage them. Fast drying.

Helly Hansen thick socks (Sleeping) – Made my feet come back to life after long days in wet shoes/socks.

Outdoor Research Flurry Gloves – Used only a few times but they were warm. I have had problems with finding good gloves as I tend to freeze my hands off when I’m outside but these did the job well. A little heavy but well worth it for me. (80g)

Oakley Holbrook 9102 – Expensive but keeps the sun out of your eyes and they are Polarized.

Suunto Ambit – Great watch, love the fact that it has a built in GPS so you can track your every move. It’s nice to look at the trails you when you get back home.

Black Diamond Alpine Carbon Cork – Awesome trekking poles. After about 4 hours I cut of the wrist bands and threw them in the trash. I couldn’t stand them. And after doing that the poles were much lighter and more comfortable. It was also easier to attach them together when pitching my UltaMid tent.

Granite Gear A.C Blaze 6 with a (1) Granite Gear Hip belt pocket attached – Good pack, very comfortable. My maximum weight carried with 1l water was just shy of 10kg. Had one thing with the pack and that was that one of the plastic buckles on the hip belt dug in to my hip and caused a bruise. I typically have this issue with all packs I carry so it might not be an issue for you.

The belt pocket was a nice add-on and kept my camera and mobile safe from light rain and bumps. Though it would have been better if they were integrated into the hip belt itself.

One thing that I’d like to have are larger mesh pockets at the back of the pack. I found my self ramming stuff in there all the time and because it’s so tight against the main body of the pack it’s a bit of a hustle to get stuff out from the bottom of the pocket.

Also a few straps could have been removed like the ones on the side where the side mesh pockets are. The roll top is nice and the pack sheds water nicely. It’s not waterproof but it’ll keep some hard rain out and your stuff inside dry. I also think that the double strap solution that secures the top of the roll top could be a single strap, Y-strap, that would also save some weight.

In the near future I think that I’ll most likely go for a lighter pack. I still want a frame and a big mesh pocket. I like the ZPacks Arc Blast pack, it looks nice. Might even get some custom work done on it. HMG Windrider packs are nice too but then I won’t save any weight as they are pretty much the same weight as the Crown V.C 60 that I’ve got now. But some things are better with the HMG over the ZPack in my opinion so I haven’t really decided on anything yet. 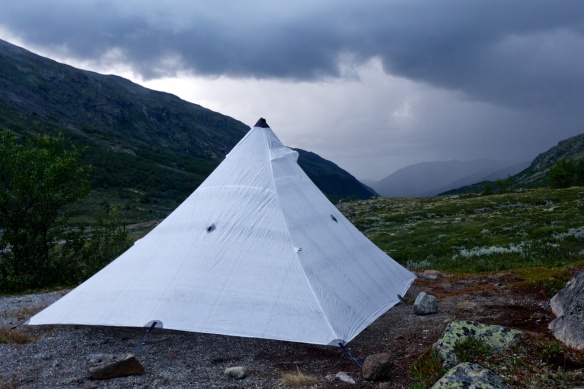 A room with a view

Known as the “Tower of Doom” because of the smell, haha.

Marmot Never Winter – Too warm for this trip and a little on the heavy side – will swap this for a lighter alternative in the near future. Might even go for a quilt. I also need a waterproof pack sack because my tent sits right on top of my sleeping bag with the result that I slept in a wet/moist sleeping bag through out the whole trip.

Therm-a-rest X-Lite – Great sleeping pad, was like sleeping in my own bed 🙂

Zpacks Pertex Quantum Bivy – Not really sure what I think of this. Had some big issues with condensation. Will get wet really fast and dries a little too slow for me. Did however perform quite good at times but my old US army issued goretex bivy that I’ve used for many years performs much, much better but that one is too heavy to bring… The Pertex material is really flimsy and breaks easily. I got some tears in the fabric but the ripstop held it together.

Sleeping through a rainy night. Hiding from dripping condensation is the plan here.

Trail Designs Sidewinder + Inferno Cone w. Evernew Titanium Ultra Light .9L Pot – Performed very well. We knew this beforehand but it’s still nice to see that it worked in a not so controlled environment like on shorter trips. We brought alcohol with us but rarely used it. Damp wood and stuff worked but we had to put some effort into it when making our fires.

Trail Designs bottle – A bottle for holding your stove alcohol. Lightweight and all that but it leaked. Good for us that we put it in a plastic bag before we started hiking.

Sea to Summit Alpha Spoon Long – Good spoon, reaches nicely into your ziplock bags without you having food all over your fingers.

JO Sport mug small – Foldable cup, nothing much to say, it’s cheap and can take a beating.

Food – Our homemade freeze dried meals worked well. Some of the vegetables didn’t really rehydrate as fast as the package said but it wasn’t really an issue. From here on I’ll remove all the carrots from the freeze dried packages 🙂

Adding some luxurious items (beer) after the hell-walk up Galdhøpiggen

Platypus Platy Plus Bottle 1.0L Push Pull Cap – I’ll never use a push pull cap again, it sucks and gets dirty. The Platypus bottles are however great otherwise.

Biltema mosquito head net – Didn’t have to use it.

Jotunheimen map – Good to have, used all the time, wasn’t too sensitive to water, had it out in my mesh pocket and was always exposed to the elements.

Enjoying the view of Visdalen. The map sticks out of the back mesh pocket, light drizzle.

IFAK – Improved first aid kit, had everything I needed. Could have had one more Compeed plaster but that’s it. I brought two and cut them in to smaller pieces.

This is what happens when you fiddle with electronics (watch) while walking! It was really deep and left a few nasty scars.

Sea to Summit towel size S – Light but doesn’t take up as much water as you’d expect. I’ll replace this one.

GoPro Hero3+ w. accessories – Great camera. The movie in my previous post was shot with it. Shot in Protune, RAW.

Half roll of TP – If you’ve got to go you better have this.

Toothbrush, cut in half – Teeth were clean.

Liquid soap repackaged – Will have to find some other brand than Sea to Summit that’s a little heavier on the dirt.

Silva compass – Didn’t use it, we were on the trails basically all the time.

BIC lighter – On-site buy, expensive, but we had to have two. Two is one, one is none…

Black Diamond Spot Titanium – Didn’t use it… Should have check one more time when the sun came up and went down.

Snow baskets for my trekking poles – Didn’t use them as we skipped one of the peaks where we should have needed them.

Biltema sitting pad – Great little foam pad for sitting or having under your knees when building a fire or similar. Weighs in at only 15g and is small enough to fit in your cargo pocket.

At the end of it all I used almost everything that I brought with me so packing-wise I had what I needed and a few extras. I don’t think I would have done this trip in another way with the stuff that I currently have.

At Besseggen. Gjende to the left and Bessvatnet to the right. Love how both the lakes are in different color.

Here comes mine and Jon’s gear lists. This is what we have packed for our 5 day trip in Jotunheimen. Below every picture you’ll find a link to our gear lists (Excel files). If you have any improvements or comments please drop them below. I don’t think we have time to make large adjustments but it’s always nice to get feedback.

As you’ll find in the spreadsheets we’ve shared some gear between each other like the sleeping- and cooking system. My list will be complete with all the stuff I use if I were to go on a solo trip.

The real interesting thing is that last year on our longest trip, 4 days, we carried packs that weighed in at 22-24kg each including water… As you can see below, things have changed my friends!

Click for larger picture! (rain jacket is missing in the picture) 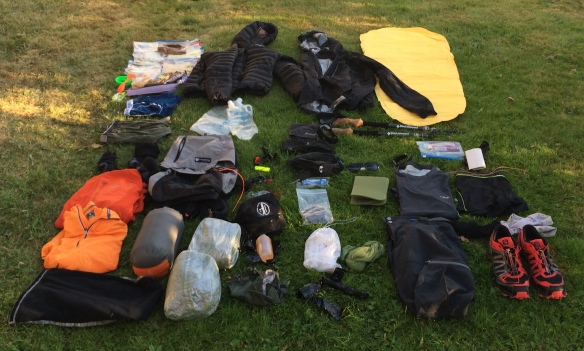 Some new stuff that has arrived within the last weeks.