Having a GoPro Hero3+ Black and comparing it to my Contour cameras the audio out of the box is anything but good. Quite sad as the camera otherwise is great…

As I want to use it for when I’m out and about I needed a solution for audio that meant not bringing something big and bulky like my Rode Videomic Pro. I Googled a lot and found this small mic from Edutige, ETM-001. The mic is omni directional which means that it’ll pick up audio basically from all directions. And it’s a stereo mic. Some will probably argue that it’s better with a shotgun-like microphone as the audio is only picked up from the direction that the mic is facing, hence removing a lot of background noice. And there are microphones for that too in the same size as the ETM-001.

As the new GoPro’s don’t have a 3.5mm jack anymore like the Hero2 you need a adapter cable for it to work that connects via mini-USB. I didn’t want the mic to just be hanging from the camera body I needed something to hold it in place. At first my plan was to glue it to the GoPro Frame and/or the waterproof body but then I couldn’t use it stand-alone with the camera or if it breaks you’ll have to replace it and that will be quite hard so that plan went out the window. I tried a few different places before I saw that the USB-adapter had a part that wasn’t flat but rather rounded where the 3.5mm jack could be glued and fixed in to place.

This is the final result! Works like a charm! I want to get a deadcat (windscreen) for the mic too but I guess that will be a problem. I don’t want anything showing up in the bottom left corner of the picture. I haven’t tried every video setting but 1080p works but 2.7k wide shows the windscreen. I guess that if I don’t use it the problem will be solved. However I nearly ever shoot in 2.7k wide other than for timelaps and stuff where I don’t need sound so for me that’s not an issue. If this is not the case for you then this particular mod won’t work. If you place your adapter so that it’s aligned with the USB-plug it won’t be seen in 1080p at least.

Made a short timelaps where you can see the mic in the bottom left corner of the screen in 2.7k wide.

Here’s a short video in 1080p and you can see a little bit of the windscreen at the bottom. So if I just make a small adjustment on the image crop it won’t be there and I won’t be loosing much of the picture anyway. If you make yours so that it’s aligned with the USB-plug you won’t have my issue. I bought 3 of these USB-adapters so if I get annoyed with this I’ll just make a new one. You can find them really cheap on eBay like four dollars a piece, just follow the link above. Make sure to buy the one that’s not a 90 degree angle USB-adaptor because that one is all flat on the USB-plug and gluing the 3.5mm jack to it will be harder, but not impossible.

Looking through all my test footage I can see that I don’t have this issue with the windscreen showing in all my videos. I guess that the windscreen just came of the mic just a little sometimes. But like I suggested, glue it so that it sits aligned with the USB-plug and you’ll be just fine!

I’ve been a Contour camera guy for as long as I’ve known about helmet cameras. When the first GoPro camera came out I laughed hard at the guys buying them win the ridiculous FOV and bulky housings. As the years have passed GoPro has sailed past the Contours in terms of image quality, not so much at the mounting part as they still were quite bulky. Lately when the Hero3 was released the bulkiness has come to a stop and the mounting options has been improved. It’s still not possible to attach it to a helmet the way I prefer it (on the side) but that might just be the only thing they really cannot do (in a way that the Contours can).

So I went to the store today after browsing and contemplating hard for the past week or so. I didn’t really know how much difference there were in image quality between the Hero3+ Black Edition and the Silver Edition.  The guys at the store basically were just talking bigger sensors and improved battery time but not that much about image quality. And when I asked about it he couldn’t really tell the difference so I bought the Silver Edition, happy with saving about 1000SEK.

On my way home in the car I was trying to tell myself that I’ve done a great deal and that it couldn’t be that much difference between the two. When I was in the store I even did some quick Google-Fu but I couldn’t really make out which one to get… Probably because many forums are full of crap and that there’s no real information on most of them. Just people arguing with small non-interesting, non-vital stuff on the cameras.

So, as I’m a nerd, there you go, I’ve said it… I started going on YouTube and really looking at the most important part, the image quality, and I found this video…

In the video this guy, Mark Hawk, really goes with an in-depth review on the Black- and Silver Edition. And I don’t know why I didn’t watch this one before but the first frames that comes out of it I was immediately aware of that I had bought the wrong version… Yay!

The picture to the right looks better, Silver Edition, not as flat as the Black Edition to the left.

The Silver Edition is pretty much pre-color graded, meaning that they have changed the output of the video right out of the camera. The Black Edition however isn’t. To anyone that doesn’t care, or know, the Silver Edition might come out as the better camera as the image isn’t as flat as on the Black Edition. But! Because the Black Edition isn’t color graded you have much more information left in the picture to work with in post-production. Post-production is the part where you edit your video before putting it on YouTube, Vimeo or whatever, making it look good.

Here you can see that the Silver Edition has much more vibrant colors.

However what this does is it gives less data to work with when applying grading and doing color correction in post. It’s like editing a .jpeg picture compared to a RAW-file.

The other part of image quality is the quality itself meaning the sharpness. The Black Edition is waaay sharper than the Silver Edition. In the picture below you can see the same place as in the first picture in this post but with 100% zoom. The Silver Edition is really blurry and you can’t really make out any detail in the asphalt as where the Black Edition is really sharp. This was the main difference why I went back to the store and got the more expensive one.

Here you can see the Silver Edition in the middle at 200%. Quite a big difference huh?

Good for me though I never unboxed the damn thing so I could return it to the store and get the Black Edition instead. 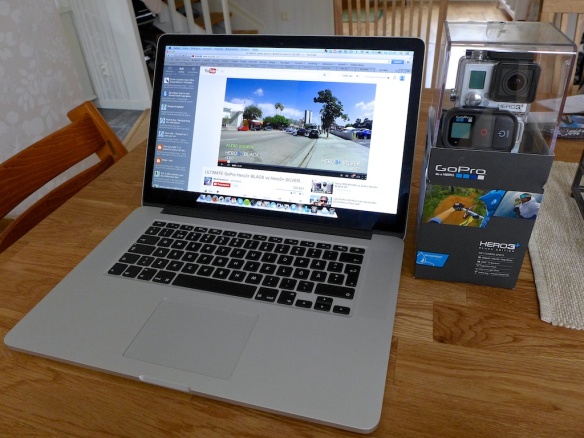 For anyone doing some serious video-work you should get the Black Edition, no doubt about it. You also get the WiFi remote basically for the cost that it costs to buy separately, if you need it that is. Also with all the other added bonuses in terms of video quality… But if you don’t really care and only want to get some nice footage of your latest skiing trip or whatever you’re into – just get the Silver Edition and be happy. It’s still a great helmet camera and you won’t be disappointed!

Here you can see the complete video that I’ve referred to in this post.