This Wednesday I started wanted to go on a short hike this weekend and I asked Jon if he was interested. At the time he didn’t know if he could make it or not but on Thursday evening we decided it was a go.

I was browsing a few folders that I had laying around the house for some time that I’d taken home with me from different information stands around town. About a year or so ago I made an x-mark next to all the different trails that I was interested in and this particular one was more interesting than all others.

As we were short on time because we had to go as soon as I came off work I wanted something close to home. We moved about 6 months ago and when I’ve been out running I’ve seen different trail markings but not given that much thought to it as I’ve never ever seen anyone come down one of them before. But now it was prefect, we could simply just walk out of my backyard and on to that trail!

The trail, Södra Vätterleden, stretches pretty far and we opted for the non-city route, stage two to stage one. Map links are here below in the order we walked. We started down south of marker 15 by the lake.

As usual I did’t think I needed to print more than the stage two parts because I thought we wouldn’t get that far in the short amount of time we had… But, we tend to walk much farther than expected every time we’re out and about so I guess I’ll have to get used to that 🙂 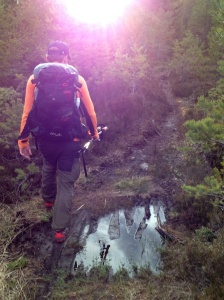 We started walking around 5.30pm and didn’t stop until 11.30pm and at that point we’d covered roughly 25km and found a really good camp site too. We made camp due north-east of marker 2, stage two, part one map. When we arrived it was almost pitch black so without our headlamps on we wouldn’t have been able to pitch the tent in such a good spot as we did. And luckily enough we pitched it right before the rain came down on us. I slept like a baby the whole night but Jon said it rained so heavily that he was worried that we would have water flowing in under the tent and get wet as we didn’t have a bathtub floor.

Coffee break in the woods. It was really warm. Rain was expected but we only got a few drops during 5 minutes.

Day two started just as good as when we started the day before. We woke up around 7 and broke camp around 8.

The view from inside the tent.

Lake Stråken where we camped.

Waiting for the food to get ready.

We had a deadline for our pickup and that was around noon. We started walking and covered some ground quite fast even though our legs were sore from yesterday. Jon had new shoes on, his Salomon Fellraisers and that was his curse with blisters and all. Even though I have walked quite a bit in my Inov-8 Roclite 295’s I’d never walked this far in them before so I guess that was what got me. Also the higher pace due to the fact that we both used trekking poles surely made an impact on our muscles and feet.

Lunch break by marker 14, stage one map. Mashed potatoes with soy-stuff in taco mix was on the menu. The freeze bag recipes are coming together quite nicely!

Backpacks – Granite Gear Crown V.C 60 and ULA Circuit. We could most definitely go with smaller packs as we have downsized our gear so much. Jon packs his Z-lite pad inside the pack and still got a lot of room left. I had to put my Z-lite pad on top of the pack to have the internal frame covered.

This was the first time I had the opportunity to try out my new Crown V.C 60 backpack and the HMG Ultamid 2 tent and I liked them a lot! Also my new Patagonia Houdini jacket was really good keeping me warm when the wind was blowing. One thing that will be changed are my pants. My Fjällräven Vidda Pro’s will be put in storage for those moments when bush-wacking is a must. They will be replace by a pair of Arc’Teryx Palisade lightweight pants. Also the sleeping pad will be swapped out and replaced with another Therm-a-Rest pad, the X-Lite. I think that both the Z- and X-Lite will do very good as a combo for really cold winter nights. I hope to get both of these things before next weekend and maybe even the new innernet as bug season is around the corner.

All in all during this hike we covered about 38km. We didn’t have time to complete the last bit of the stage as we ran out of time. We ended the hike at marker 11 where a narrow bridge crosses Stråken. I guesstimate that we had roughly and hour to go from where we stopped to reach Mullsjö, the starting point of stage one. But that part was mostly asphalt anyways so I don’t really think we missed anything 🙂